I'm still trying to update Touille's blog so that there are no more dead links or links to sites that are not secure. I've had to delete a few posts which made no sense anymore. Touille is always on my mind as I update and read old posts.

A poem by Ogden Nash


Dogs display reluctance and wrath
If you try to give them a bath.
They bury bones in hideaways
And half the time they trot sideaways.


Touille says: I must admit to the reluctance and not-quite-wrath (more of a mildly annoyed feeling) when MB used to give me a bath in the kitchen sink. She usually chose to do the bathing shortly after I had rolled in some delightfully smelly substance found on one of our outdoor walks when we had ventured off the paved streets and sidewalks. Occasionally I would discover some highly scented mud or some partially decayed animal or bird to squirm around in, coating my fur with the heavy scent. I would just be getting my fur to smell the way I wanted it to smell, when MB would scoop me up, place me in the sink,  douse me with water, and scrub me with odd-smelling shampoo, totally ruining the scent effect that I was trying to achieve. Why do humans and dogs have such different ideas of how one ought to smell?

- Touille, who has heard that a dog's sense of smell is more highly developed than a human's, and therefore wonders why humans think that they know better about all things smelly

Bonus link: How often should you bathe your dog?

But by the time the Wayback Machine did its web-crawling thing on July 19, 2008, many of the links and photos on Doggie's Blog had broken.

I can see it's going to take quite a while to update Touille's blog for her. It's a labor of love. I feel like Touille is here with me as I look over old posts.

One thing that Blogger used to do, that I can't see how to set it up to do again, is to choose the wording of the automatic text that is added as one makes a post. Instead of "Posted by MB on (date and time)," my custom design would automatically say "MB typed it for Touille on (date and time)." Now that I'm looking at older posts, that wording is gone. So on some of the updates I am adding those words. It may be a small thing, but it's something I always enjoyed seeing. It seemed to add to the conceit that it was indeed a little dog's thoughts being blogged, and the human was merely the conduit. OK, a little silly I guess. But Touille and I are not afraid to be silly if the occasion calls for it.

I think that Touille would have liked the expression "You do you." I never heard people say that back in the day, but Touille always "did Touille" no matter what others may have thought. I sure miss that little dog.

Tuscon, Arizona has a Touille dog available for adoption 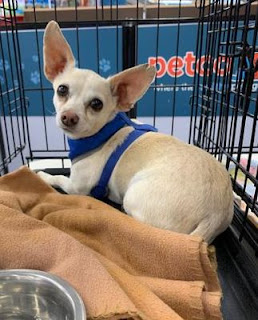 The dog pictured above is a young male Chihuahua mix available for adoption. At the Adopt A Pet website you can search for adoptable dogs, cats, and other pets who need homes, or you may find out how to rehome a pet who needs placement. I found the site when I was using Google to see what came up when I searched for "Touille" (no longer does this blog come up on the first page as it did at the height of Doggie's Blog popularity).

I was struck by how much this little dog resembles my (female) Touille. The Tucson dog's ears are bigger, but the facial expression and coloring are very similar. And Touille of St. Louis had a wart in the center of her forehead, which our friend Clint called her "Third Eye"! 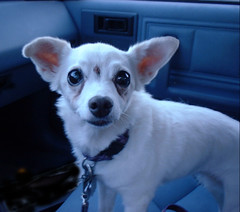 
Now that I am no longer on this earth, I am not worried about the popularity of various blogs including my own. But I am happy that MB has found something to occupy her time that involves remembering me, her faithful companion for so many years. For those humans who are able to adopt a pet, that is a wonderful thing for caring people to do for animals.

I am happy in heaven because I no longer have pain or infirmities, and many of my dog friends are here with me. When I was still on earth, I blogged about what heaven might be like. It's a little like the beach, but not exactly. I am a dog who, when on earth, liked to be precise in my descriptions. But dog heaven defies description to the point that I can't really describe it. For those dogs (and people) who haven't made it to the heavenly realm yet, you can picture it like the San Diego Dog Beach if you like.

- Touille, who maintains that a picture may be worth a thousand words, and that dog heaven is more wonderful than a thousand pictures 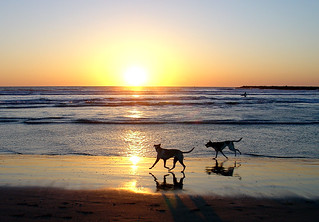 It's a lot of work updating a 14 year old blog!

MB says: I'm trying to update Doggie's Blog to make it a nice tribute to Touille.

It's taking a little longer than I thought it would. Just for one example, when I looked at this post about greyhounds on Touille's blog, the original link to Mr. J-Walk's blog led to a website marked as dangerous! I removed that link entirely. The link to the story about Greyhounds in Kansas was dead. Google-searching the quoted portion, I found another article on another website which summed up the story. And following the original link to the National Greyhound Society redirected to an updated secure website.

The Blogger platform has easy ways to update each post's http links to https by clicking a "fix" button. However, it's not always just adding the letter "S" that is needed. Flickr has completely changed many of its URLs for older photos. I've had to update each photo from the old days with its new URL. Luckily the old URL leads to the photo, just not directly to the code needed to embed it on Blogger.


MB is sitting at the computer day and night trying to update this blog. I thought that she decided to retire from her "day job" so that she would not have to spend all day in front of a computer screen. If I were still on this earth, I would insist that she take some time to get fresh air and exercise. During my lifetime, I made sure that the two of us got out of the apartment to do some serious walking. My suggestion to MB (who is not planning to get another canine companion) is to act as though I, Touille, am still here with her and need to go outdoors. She can use the time walking around to think of new things to blog about, to take lots of photos, and to remember how much fun we had together during our 16 years together on earth.

- Touille, a small dog who never got too old to walk (though at a more leisurely pace in later years)

We all need to stay hydrated and cool 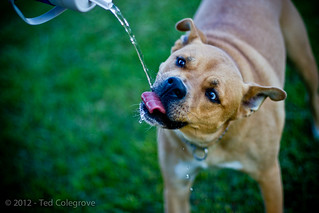 It's getting warmer in the northern hemisphere. Don't forget to stay hydrated and cool.

If you are in a flooded area, remember that the water may be contaminated with chemicals, sewage, and other pollutants.


Conscience is the inner voice which warns you that someone may be looking. 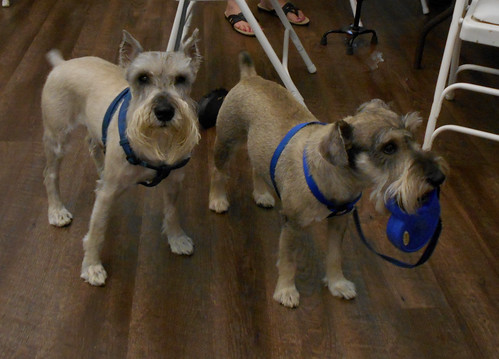 The album Pride Dogs from 2018

If Touille were still doing this blog herself (with MB typing of course) she would probably say something like this:

Notice the actual floor in this photo. These dogs are indoors at the Tower Grove Pride Fest. In 2018, for the first time, an air-conditioned area was available to festival attendees and their animal friends for an extra charge. MB felt it was worth the money to be able to get out of the heat inside the Stupp Center. And as a dog who enjoys comfort, I heartily agree!

For years MB had been bringing me to outdoor events in all kinds of weather. Now that MB is older, perhaps she has an appreciation for comfort more than ever before. MB and I used to share an ice cream at Pride Fest every year, but for the last couple of years of my long life, I was able to remain home while MB attended the festival during the hot midday hours. No amount of tree shade or ice cream can really compete with actual air conditioning.


MB typed it for Touille on May 31, 2019, wishing that air-conditioned areas of Pride Fest had been available during Touille's earthly life 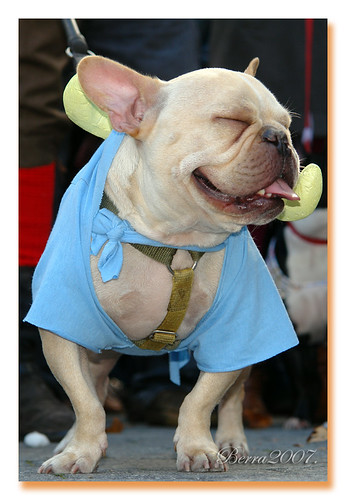 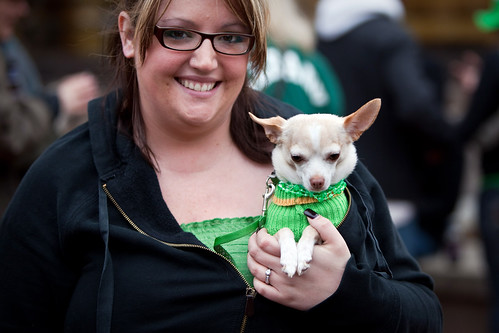 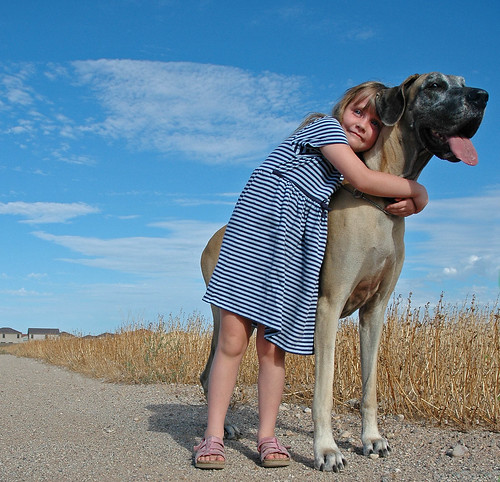 Mo & Go, originally uploaded by Capital I.
The photographer says:

You were a truly amazing friend, companion, and excellent hound. You lived a long and happy life (nearly 9 years).

You will be missed and loved forever.

I was moved by this photo of Montana and Indigo. It really expresses how we feel about our animal companions.
Posted by MB at 8:07 AM 2 comments: 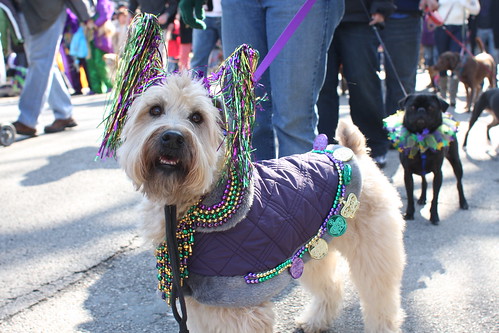 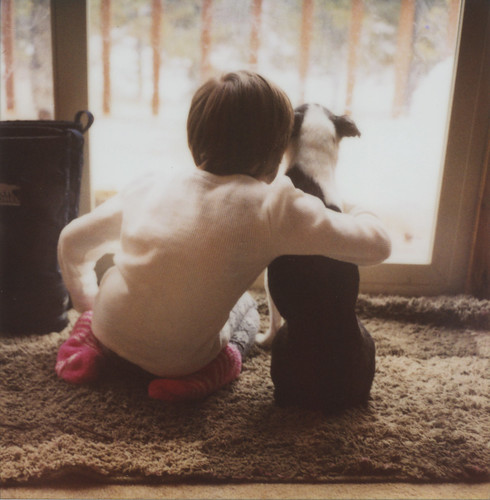 This photo really sums up how we feel about our canine companions.
Posted by MB at 12:10 PM 2 comments:

NOTE: This photo album is no longer available on Flickr. I am leaving this post for now because there are some comments that I don't want to delete. 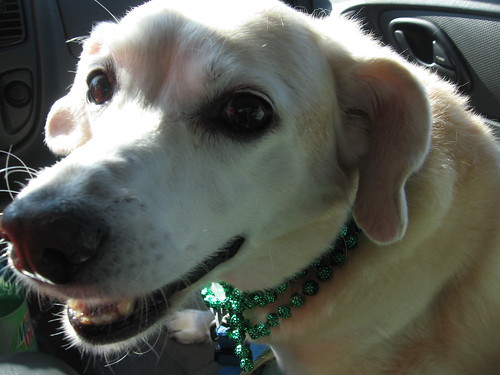 This photo is from the Barkus 2008 parade. Nutmeg died yesterday, April 11, 2009. She was always a good dog and was greatly loved.

Peso at the Blessing of the Animals 2007 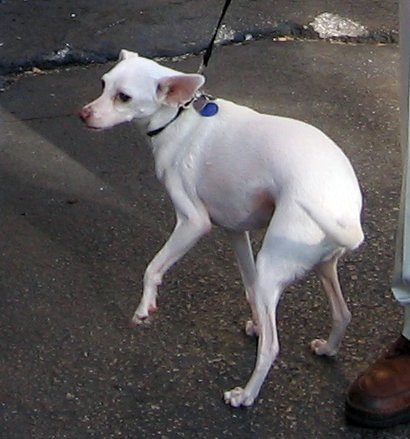 Peso at the Blessing of the Animals 2007, originally uploaded by MBK (Marjie). 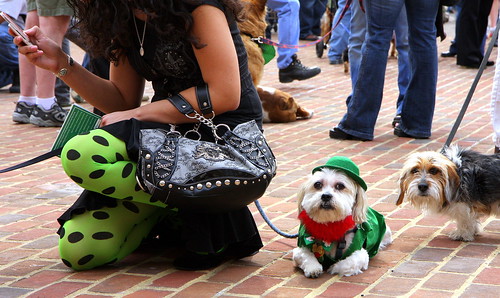 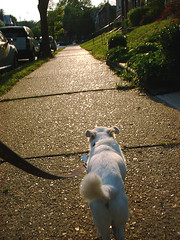